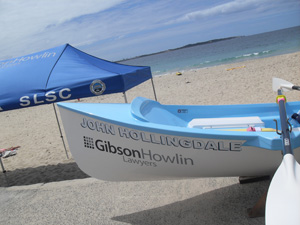 Gibson Howlin Lawyers has for several decades acted as Honorary Solicitors for Cronulla Surf Club, and a large number of its Members.

Reg Gibson and Matt Howlin were honoured to have the John Hollingdale Surf Boat launched as a brand new surf boat bearing the logo of our Firm on Sunday 6 April 2011.

This is the first time in the history of the Cronulla Surf Club that a new surf boat has been launched and named without commercial sponsorship.

The day involved a welcome address by the President Greg Holland, by the Patron Barry Ezzy and involved distinguished Parliamentarians including Scott Morrison, Federal Member for Cook, representatives from Sutherland Shire Council and the wider community. A large crowd of nearly 200 people assembled on the beach and then continued with lunch and festivities in the Club House.

The surf boat is expected to perform with distinction in upcoming Surf Life Saving Competitions. It will proudly bear the name of John Hollingdale, (a long serving and esteemed Member of the Club), in conjunction with our Firm.

The Partners see this as a form of recognition and reward for decades of Honorary legal service to the Club. The gesture is greatly appreciated.